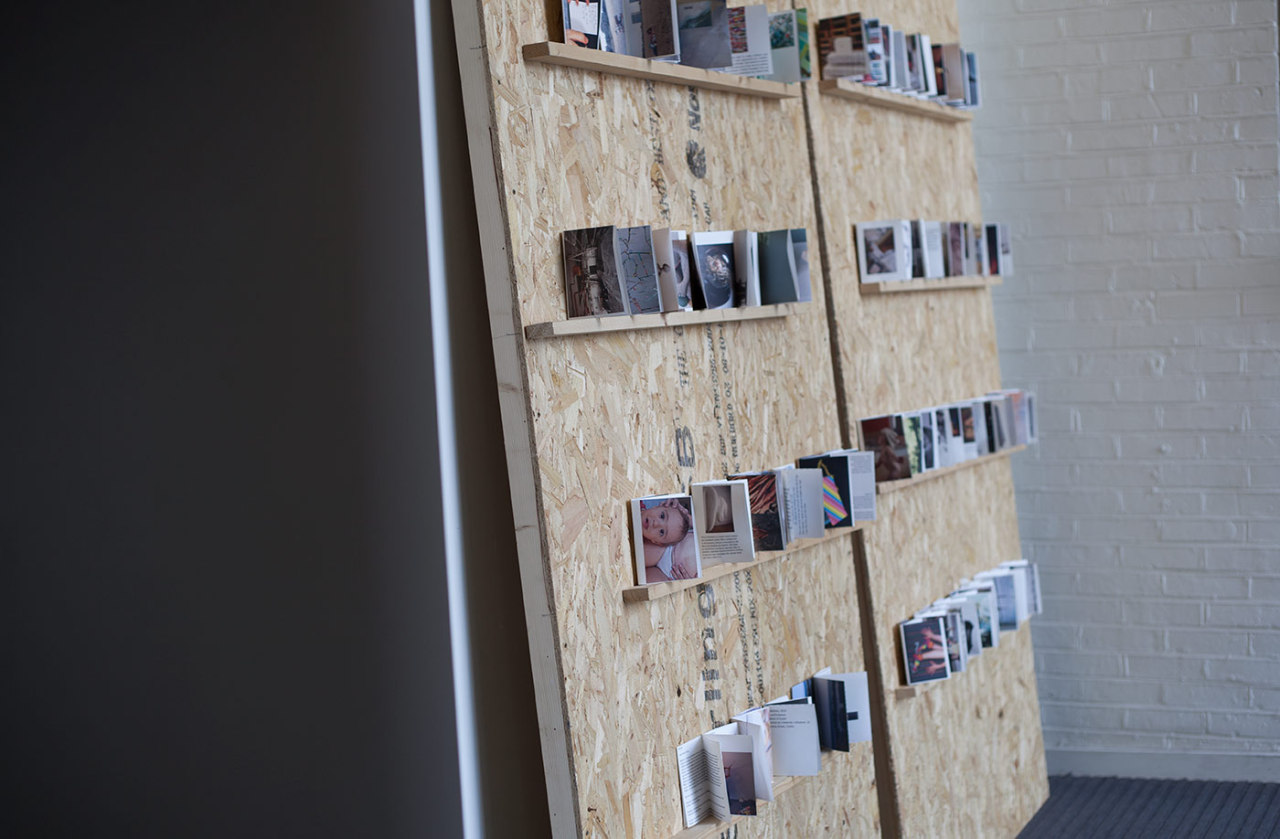 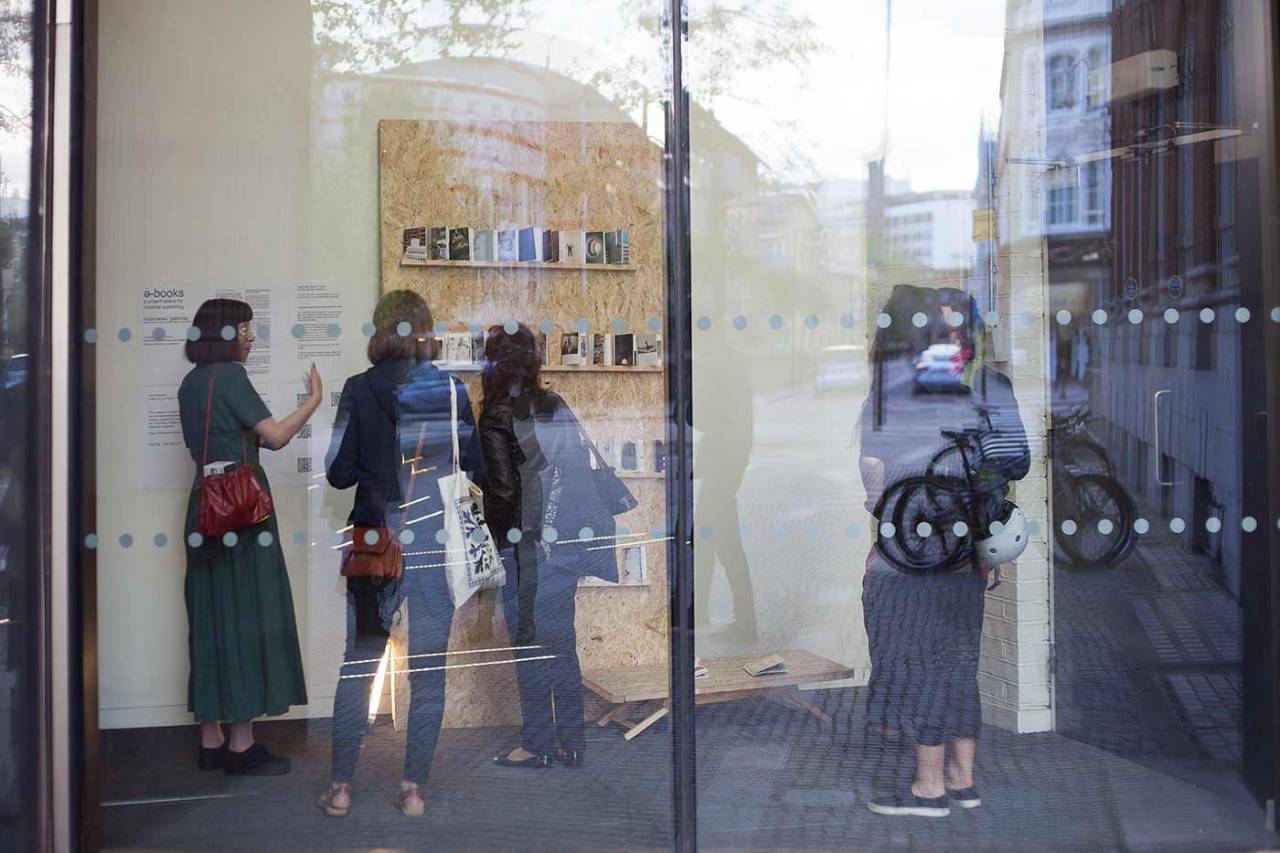 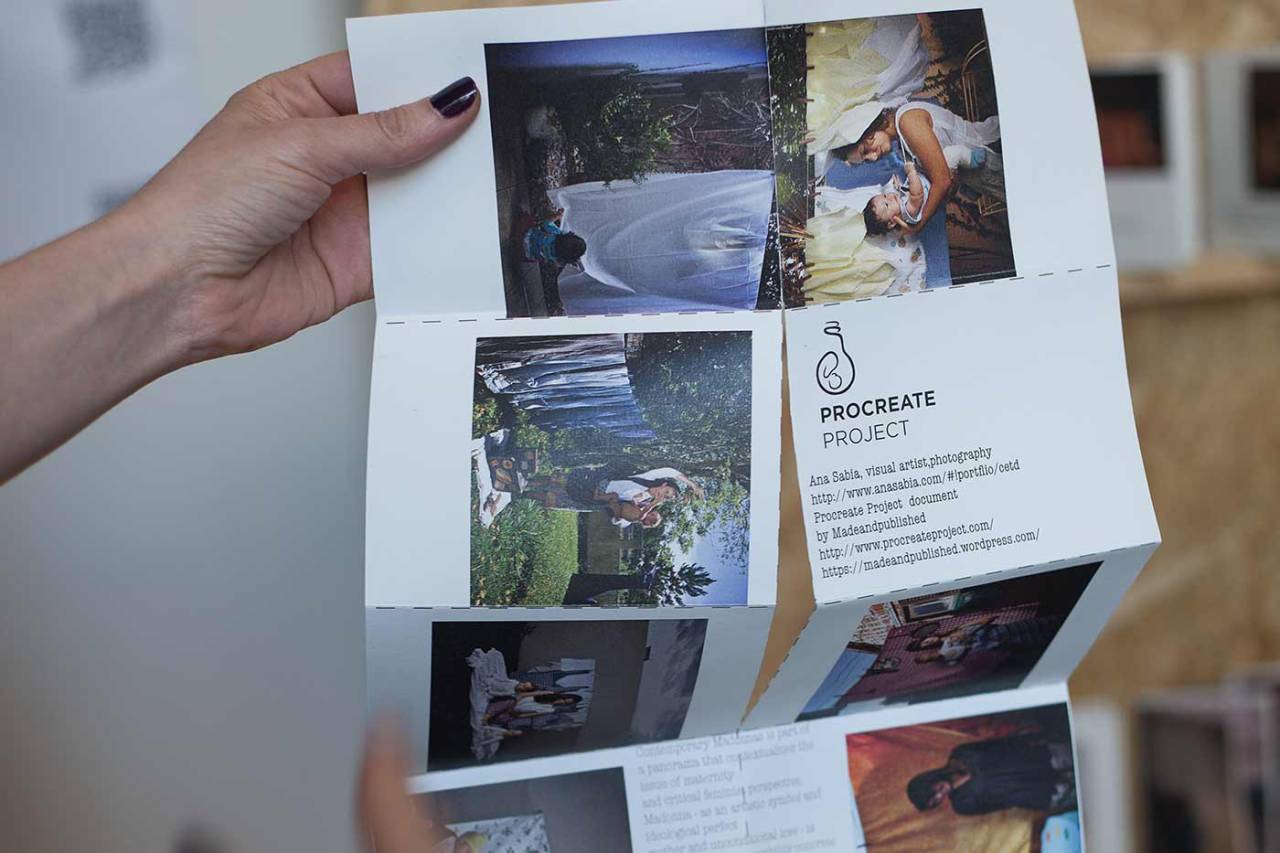 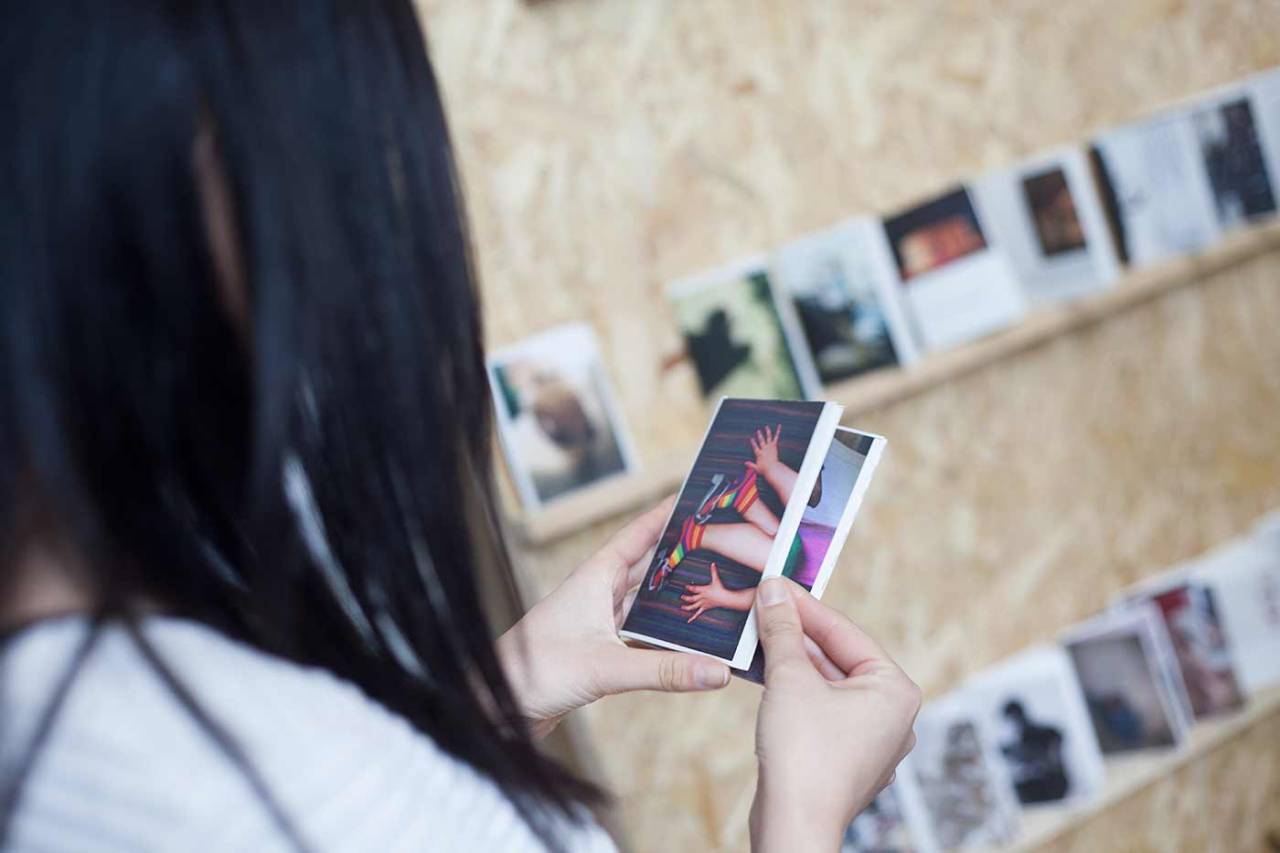 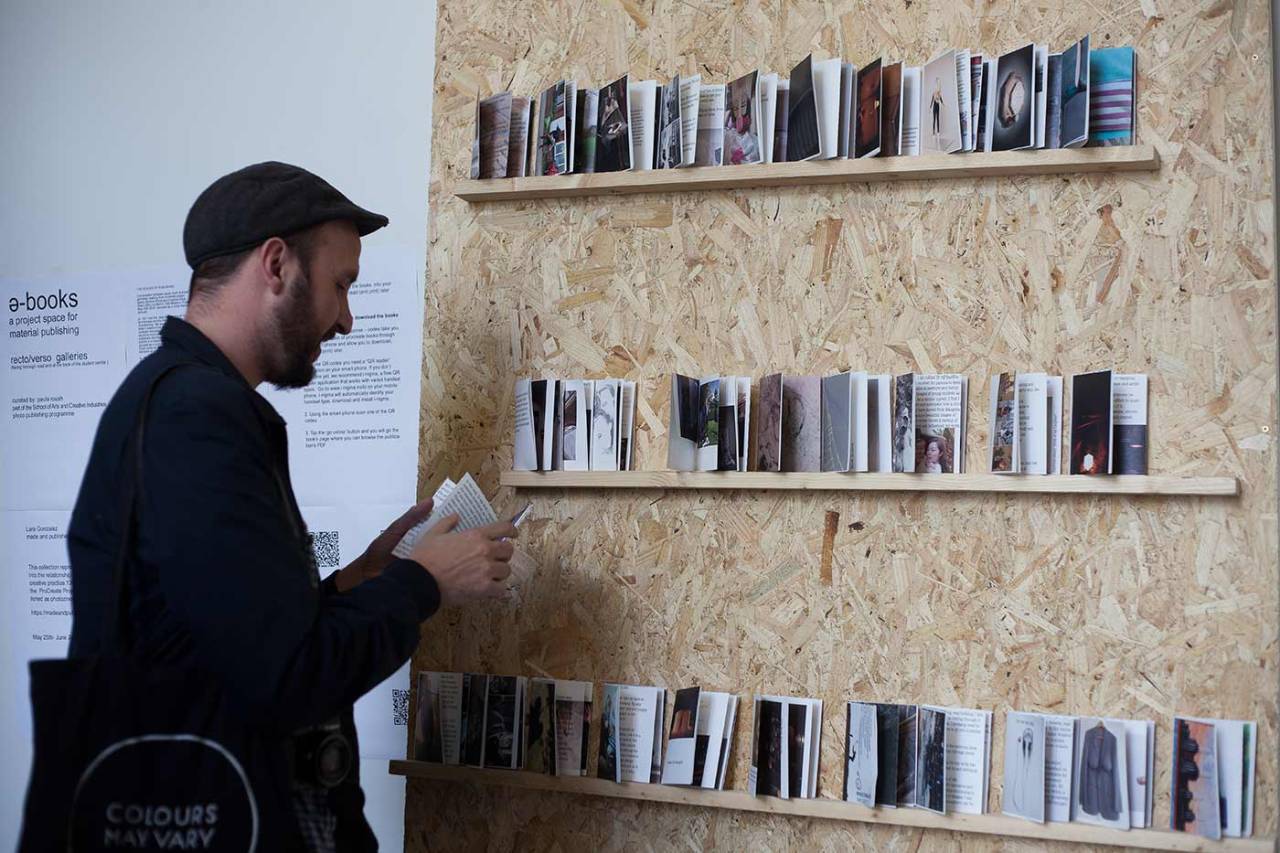 ə-books #1
Lara Gonzalez:
made and published ﻿

ə-books project space, opened in May 2016
and was created to explore the reciprocal
relationship between gallery and publication
as exhibition spaces.
Its intention: to expand on  the taught
photobook publishing programme,
at the School of Arts & Creative Industries,
as well as contributing to ongoing debates
around photobook publishing and curating.
The programme alternated the presentation
of students' photobook works with
photobook publishing projects
by guest photographers,
aiming to promote a dialogue
between the School
and independent practices.

An exercise in the use of liminal space for indie publishing, the project started with the occupation of two vacant spaces
at the front and back entrance to the Students’ Centre
at the London South Bank University.
With its two walk-in vitrines, the spaces acted as a folio
(a double side printed page) between the interior and
exterior of the building, offering a public display interface
for photobook works.

ə-books project space was evicted when the Students' Union
(without due consultation/process with the students and lecturers)
gave the space to the Amazon corporation to place one of their lockers. The project's signage is still visible on site.

For the second year of activity, the project used
the Borough Road Gallery. 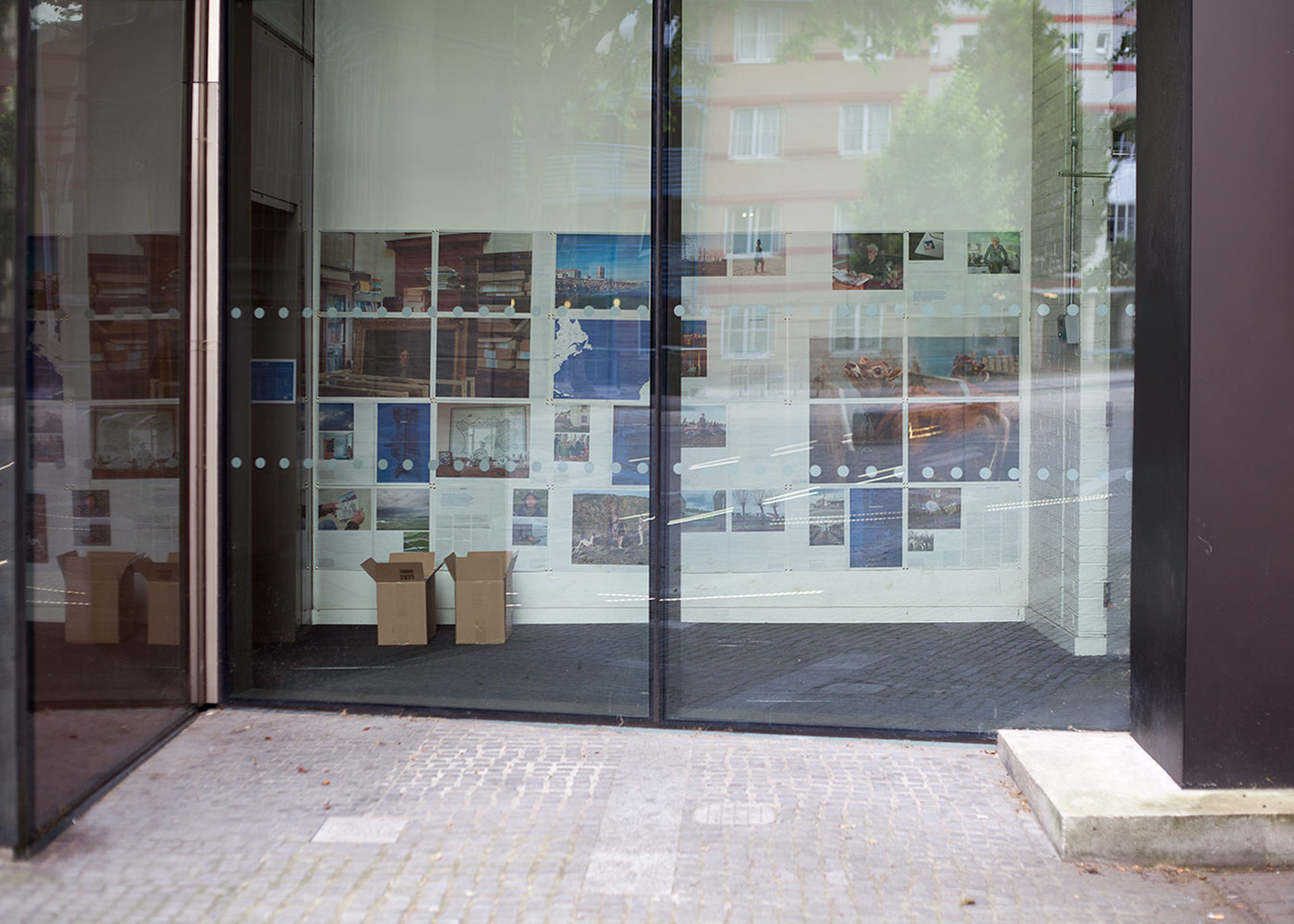 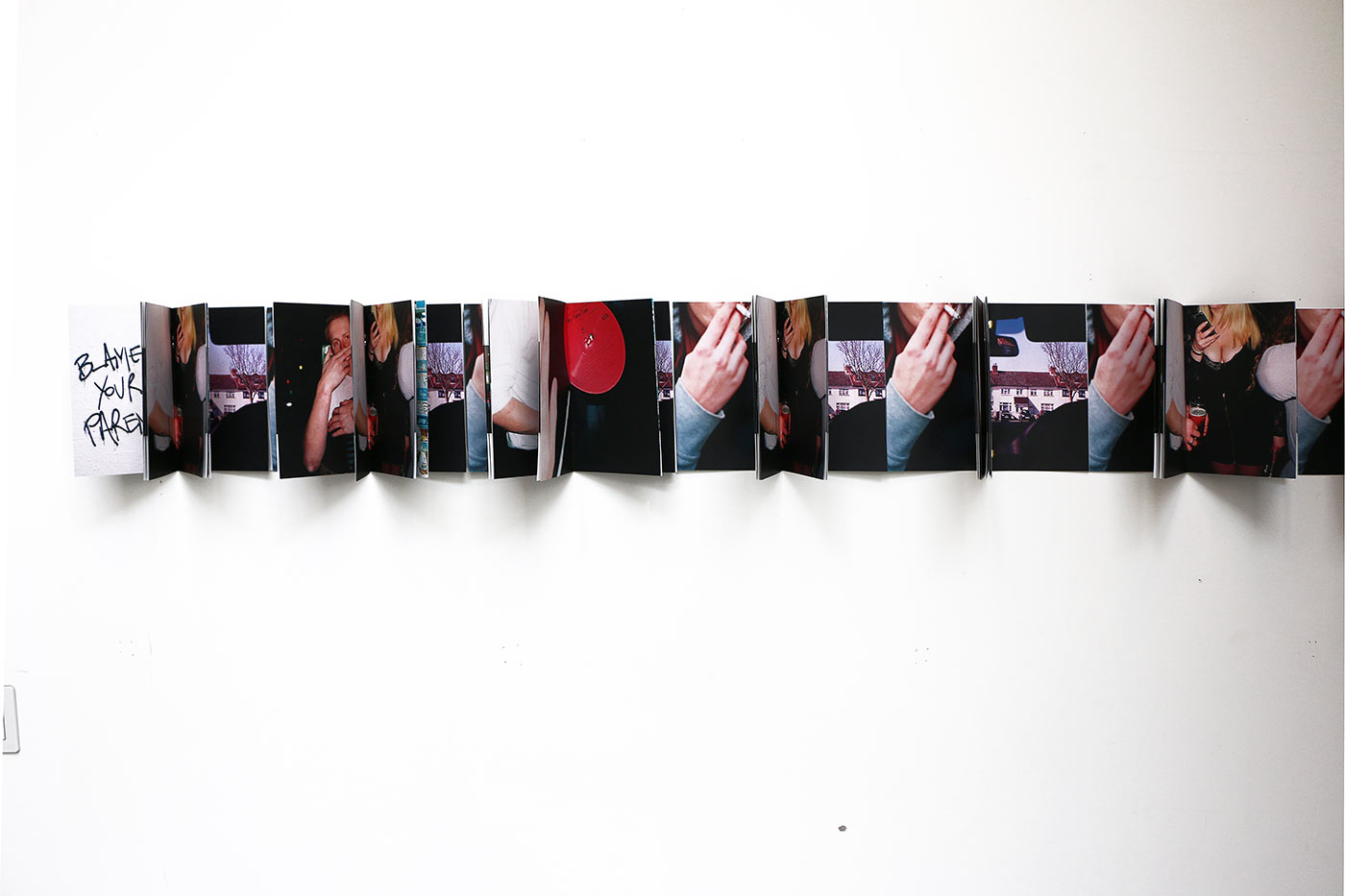 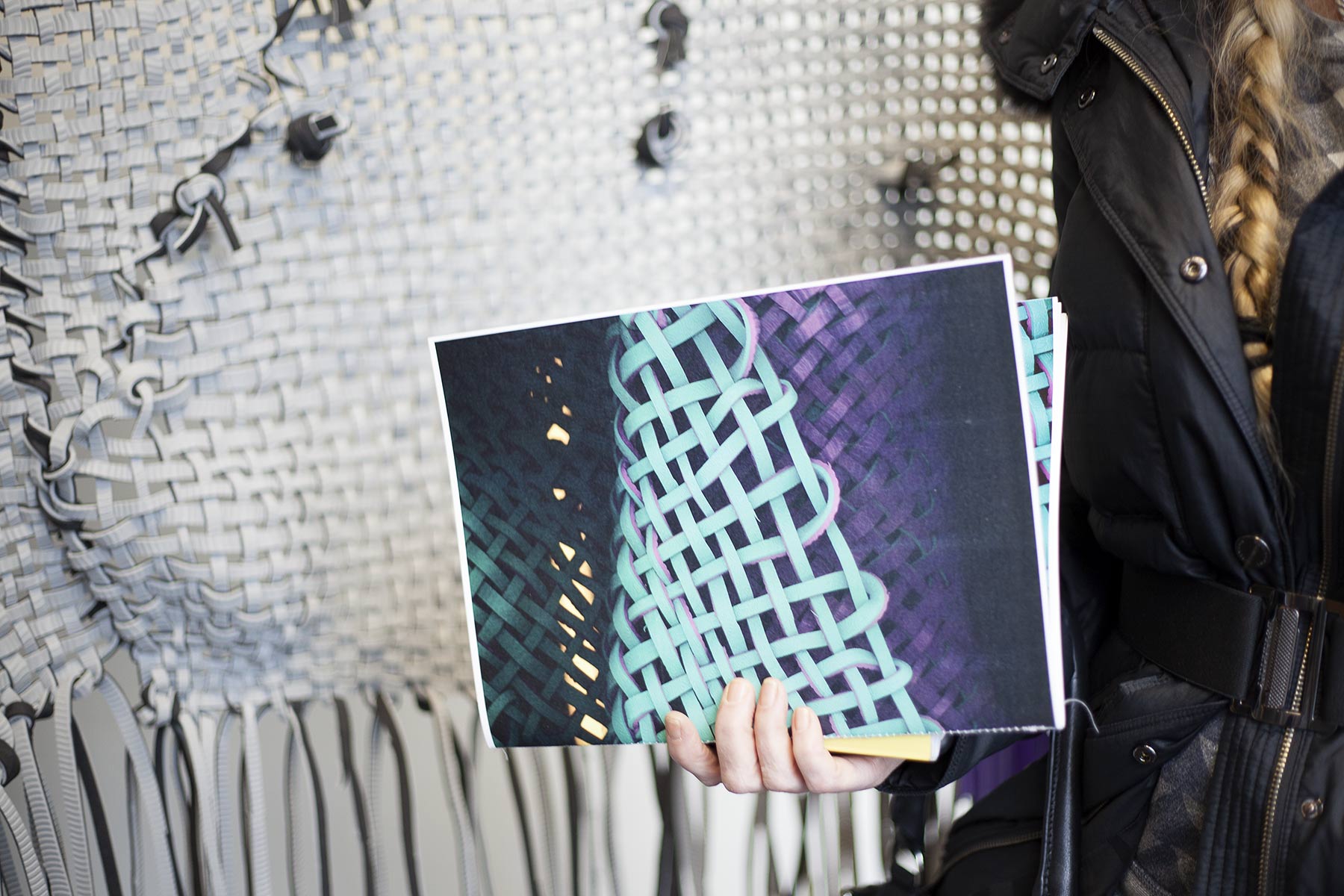 ə-books #5  Jessica Brouder:
I Believe in You
[see exhibition here] 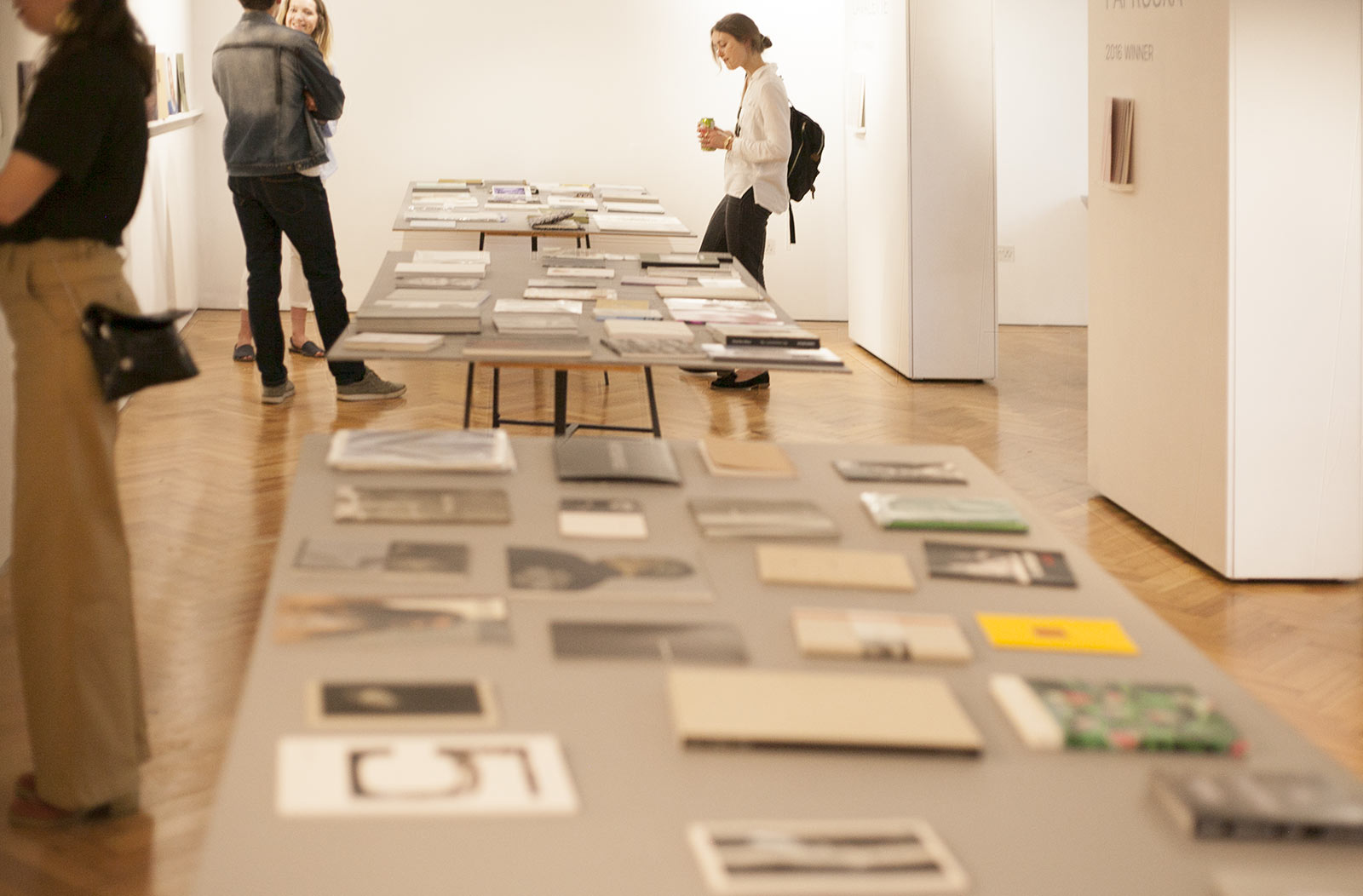 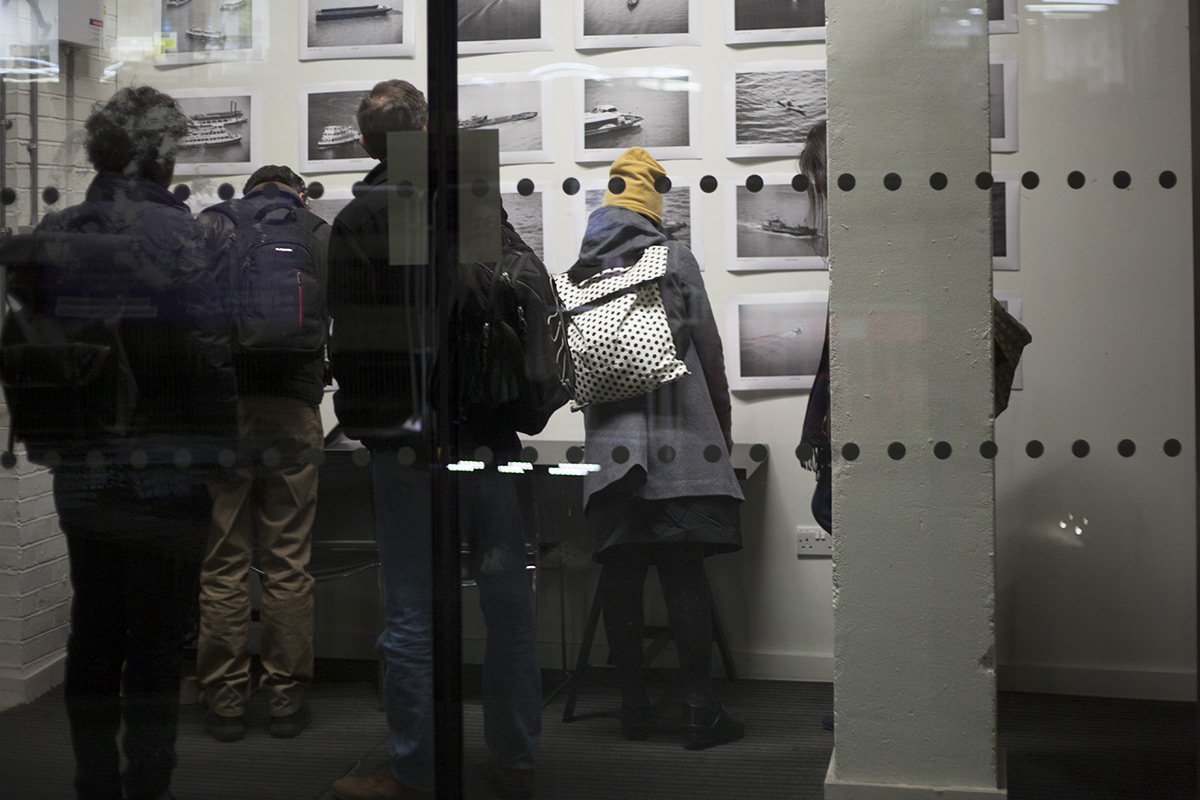 It is that inexplicable thing…a kind of a “huh?” … described by Ed Ruscha to Willoughby Sharp in a 1973 interview, as a feeling evoked by some photobook works …
WS: … It seems to me that this approach is something you pioneered with Twenty-six Gasoline Stations precisely because the idea had priority over the execution, which you made as anonymous as possible. You shot fifty stations and pared them down to twenty-six so the original idea carried. I’m interested in your reaction to that.
ER: I realized that for the first time this book had an inexplicable thing I was looking for, and that was a kind of a “Huh?” That’s what I’ve always worked around. All it is is a device to disarm somebody with my particular message. A lot of artists use that.
WS: Give me some examples of “Uh.”
ER: I don’t know, somebody digging a hole out in the desert and calling it sculpture. You know, it’s a surprise to people.
WS: Would Duchamp be the first “Uh” artist?
ER: I think that would be spelled H-U-H, with a question mark. […] I just use that word to describe a feeling that a lot of artists are attempting to bring out, and some are doing it very well.

In “…A kind of a “Huh?”: An interview with Ed Ruscha” by
Willoughby Sharp, originally published in Avalanche 7, 1973

BLAME YOUR PARENTS: DOING IT YOURSELF WITH
VINTAGE FILM CAMERAS AND GOOD OLD PAPER ZINES
/ə-books #3 zine
conversation between Amy Warwick and paula roush
On the occasion of the exhibition Blame your parents
[a photozine of post-teenage years]
September 14th- October 12th 2016

About [ə] the upside down e or schwa

It is the ‘uh’ sound found in an unstressed syllable, like the final vowel of “sofa.”
It’s the most common vowel sound in English.
Before people started calling it “schwa”
in English (around 1895) it had a lot of nicknames: the murmur vowel, the indeterminate vowel, the neutral vowel, the obscure vowel, and this is why it is a good vowel to refer to photobook works, a contested term that remains under scrutiny (the eternal debate: is it a ‘photobook’, a ‘photographic book’ or a ‘photographically illustrated book’?) in spite of its established position within the history of photography. 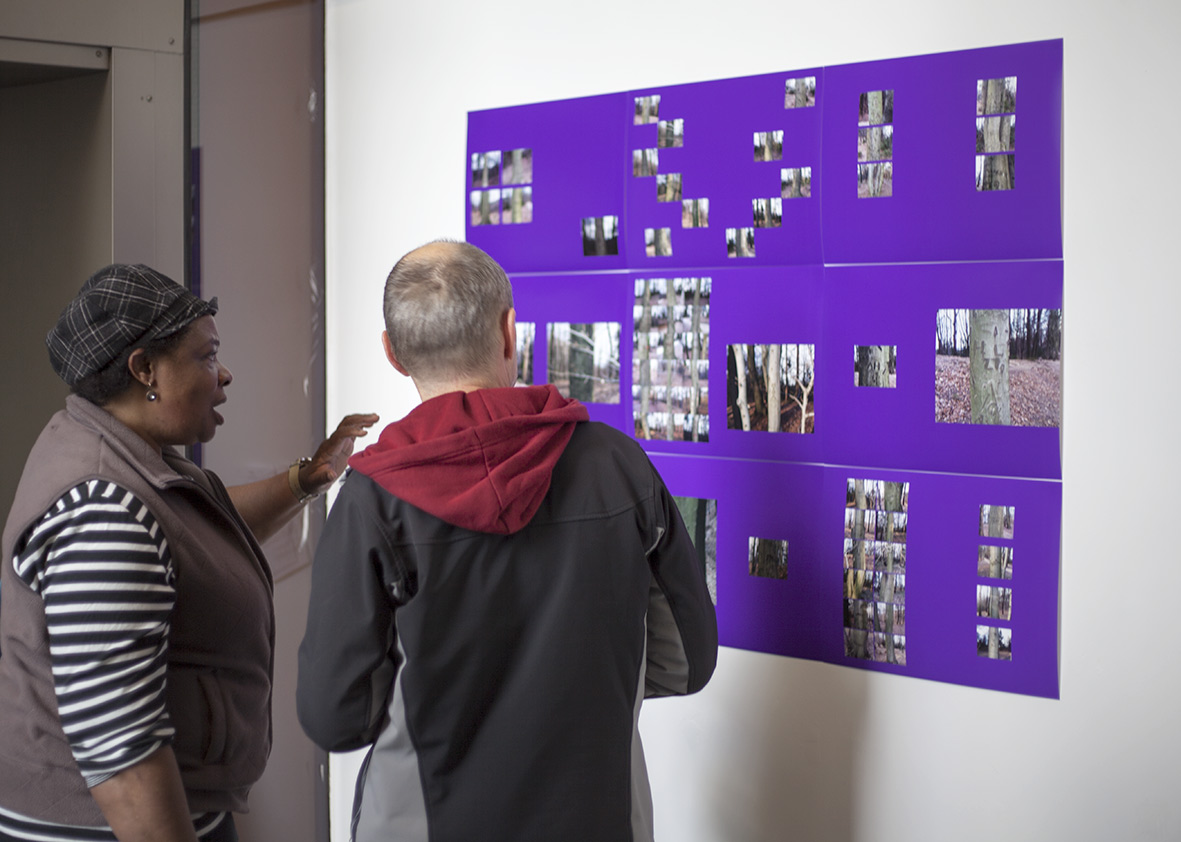 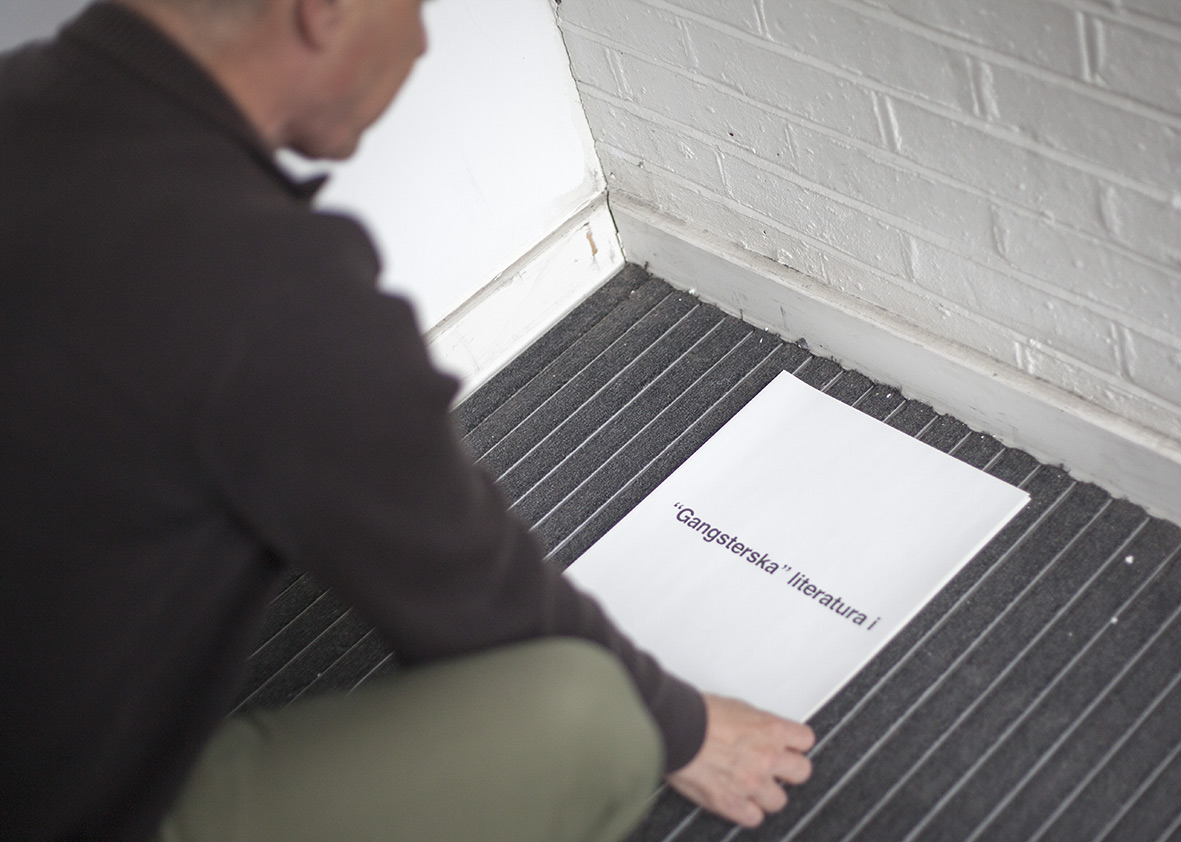 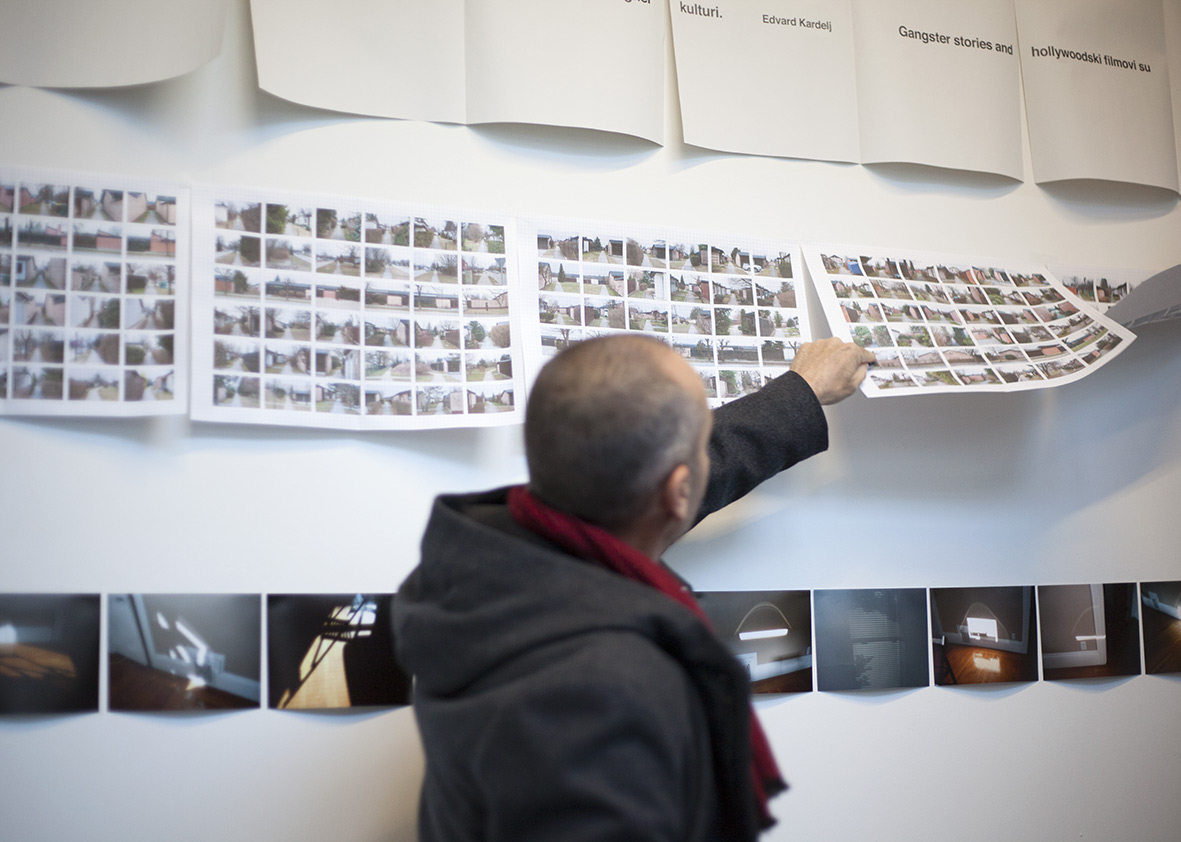 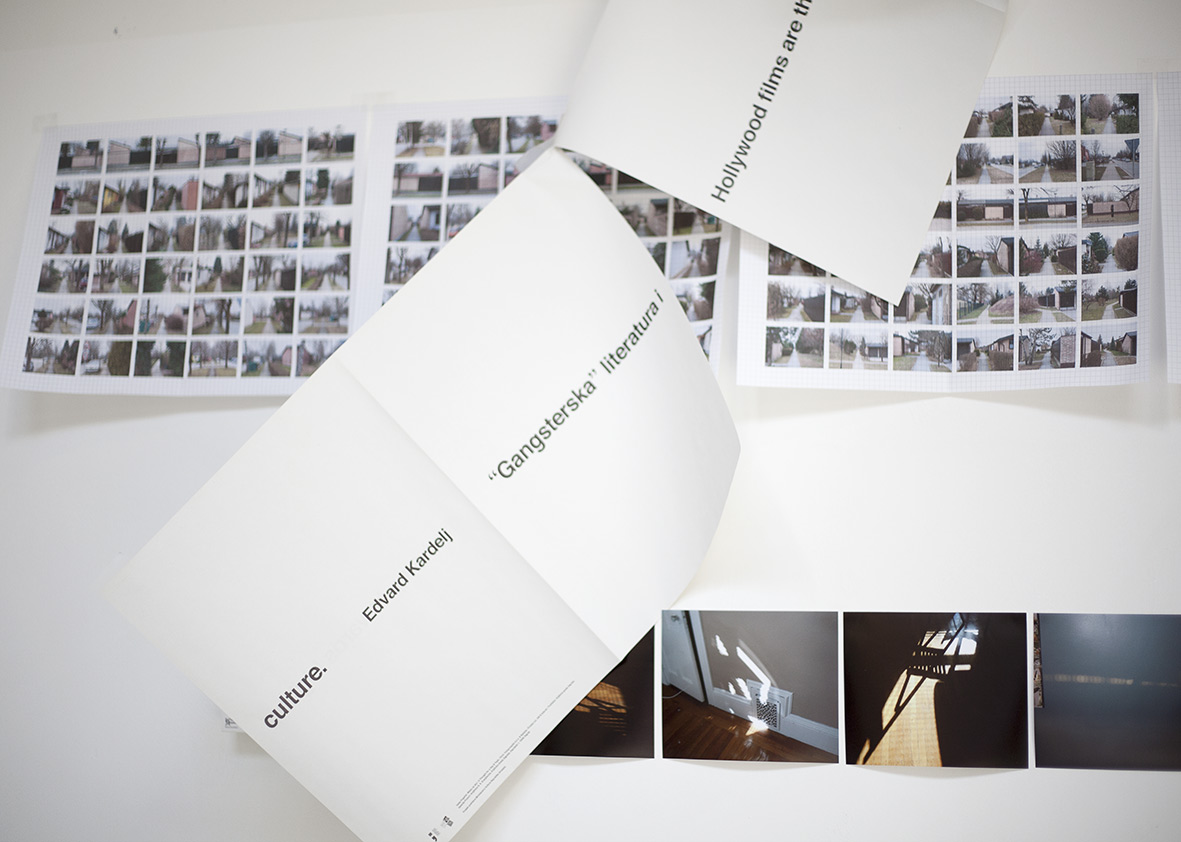