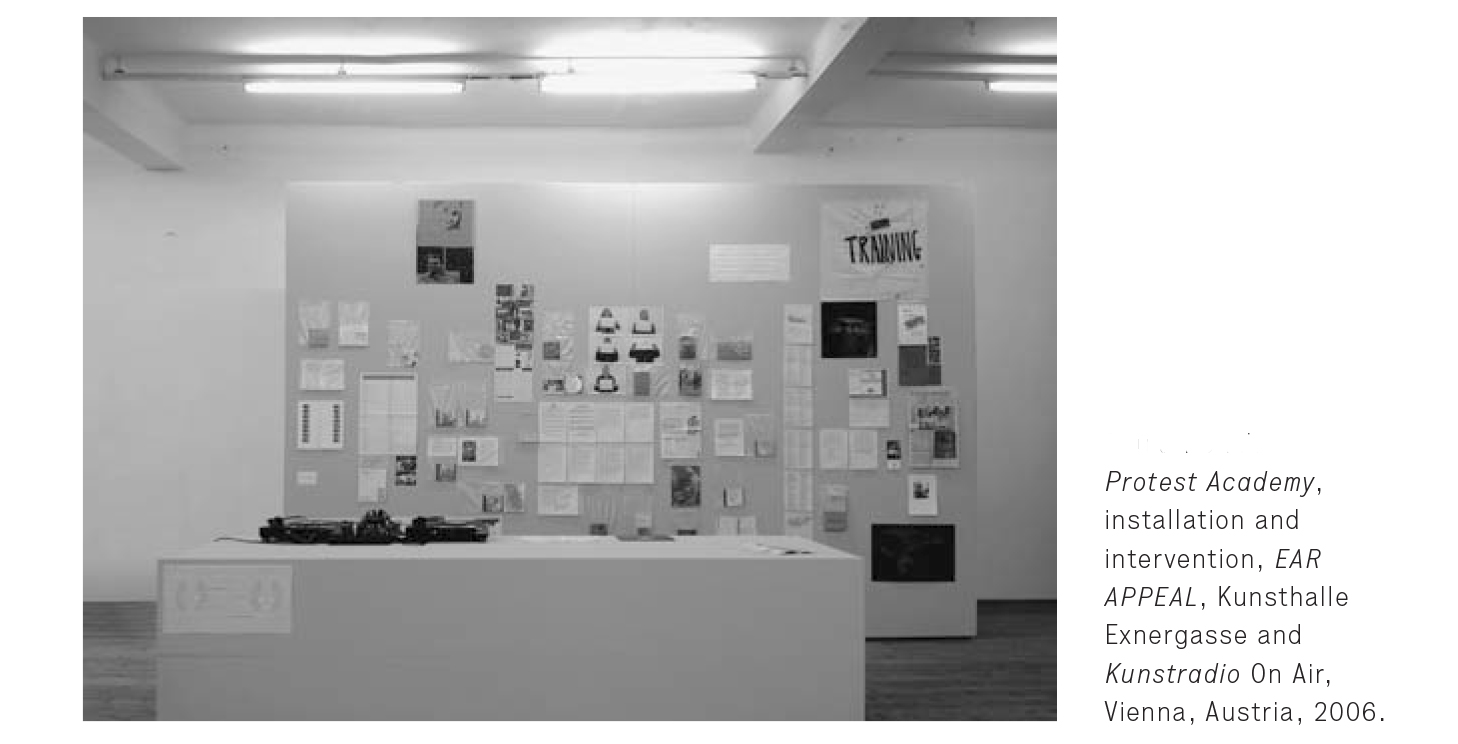 In addition to their pieces for the show at the Kunsthalle, several of the EAR APPEAL artists—Justin Bennett, Rashad Becker, paula roush/msdm, Ultra-red, and Annette Weisser—were asked to devise works for radio to be broadcast by Kunstradio on Austrian public radio’s cultural channel Österreich 1 (Ö1), while the show was running, and to remain available online as downloadable MP3s. EAR APPEAL ON AIR was explicitly part of the overall exhibition concept in that the series of radio programs was designed not as an accompanying program but as an extension of the exhibition space.
The radio pieces all featured one of two aspects: working with found urban sounds or reflecting on the technology of the radio as a way of achieving an impact at the point of delivery in the external world. This created a concrete interrelation between inside and out that was put into practice and continued within the space of radio.
What makes the presentation of Audio Culture on the radio significant? Assuming that the presentation of art consists of a complex mesh of spatial, technological, institutional, and situational conditions, the specific character of presenting Audio Culture on the radio lies above all in its placelessness, situation-specificity, and everydayness. A radio set can be installed in various places and remain switched on around the clock: a radio set can host an instant, immaterial, and transportable exhibition, just as hats, publications, and boxes have become exhibition venues. The inside and outside of the radio space are manifested in the radio receiver’s on/off switch. But making an exhibition also means creating a space characterized by selection and presence. If, depending on broadcasting times, radio can be listened to on the street, in the car, at work, at home, or while jogging, then more than anything else, art becomes totally mixed up with the casual nature of everyday life. But this blending of art and everyday life is distinct from that activated by conceptual Fluxus artists like George Brecht and John Cage. Does art have a chance in the everyday white noise of radio if the listener does not have to give up his or her passive, receptive role? How can a «distribution of the sensible» be both called into question and reconfigure

Both paula roush/msdm (mobile strategies of display & mediation) and the Ultra-red group (for EAR APPEAL, Dont Rhine and Manuela Bojadˇzijev) used the Kunsthalle as a meeting place and discussion venue. Generally speaking, radio took on the role of postproduction as well as that of publication and distribution.

After periods in London and Leipzig, London artist paula roush localized her Protest Academy in the show in Vienna as a vital structure for cooperation, exchange, education, and information-gathering about audio tactics that articulate social or political resistance.
When does sound become information and protest?
As the setting for a workshop and as an installation in the exhibition, visitors had access to the protest archive begun in London in 2005 containing newspaper articles, CDs with songs of protest and peace, an opera libretto, theoretical text by Toni Negri and Gilles Deleuze, and a variety of projects and documentation by artists including Oliver Ressler, Temporary Services, and Melanie Jackson.

For her performances and collaborations, paula roush used the archive, with entries divided up into the four categories «What are we doing? What’s happening to us?What needs to be done? I prefer not to.» At the same time as being a collection of materials, the archive also acts as working material. On the radio, a record produced by paula roush and the artist Isa Suarez was played which brings together the contents of the archive in edited form. Like the archive, the four tracks on the record are ordered using the four categories, allowing the sound material to be presented in different contexts, such as live jam sessions or performances. Protest slogans can still be heard among the sound collages, but this reworking questions the degree to which information must be comprehensible if a praxis of resistance is to become effective protest.