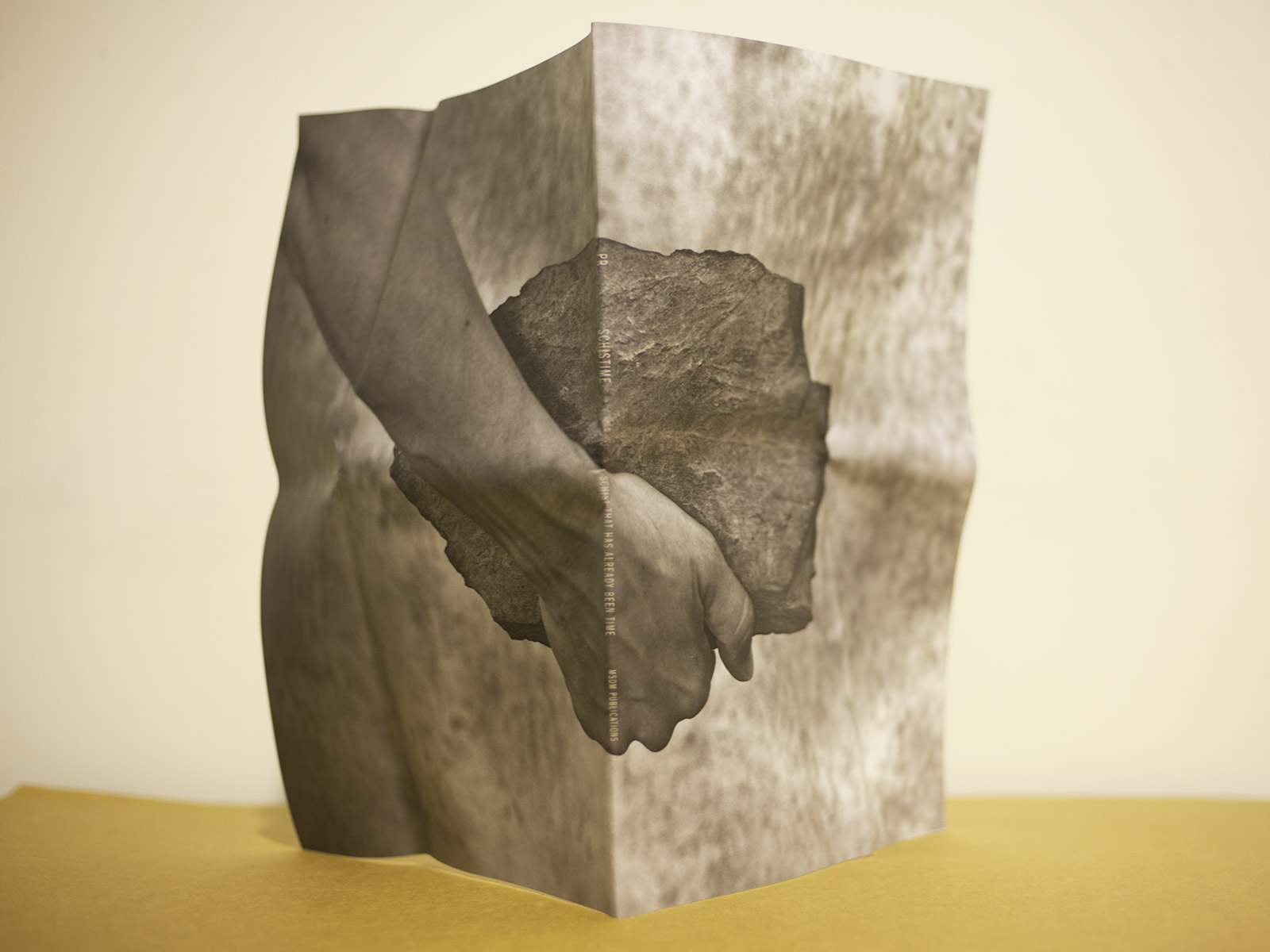 SCHIST PAINTBALL FIELD: Time that has already been time

SCHIST PAINTBALL FIELD:
Time that has already been time - a preamble in two chapters

The uses of time are definitely a challenge for artists. One may approach time by excavating it in an archaeological way, thinking in terms of historiography , which is not to accept the parameters of the official history with its definite causal time. Rather, questioning the historical perspective, this is part of the artistic task.

I do very different artworks in terms of medium but the work is usually located in the public sphere and driven by themes of artistic research. Sometimes I publish books, work with archives and photography, other times I make movies, and when I'm not doing either, I accept commissions for so-called performative installations that involve longer processes of collaboration with groups of participants. Time and memory are very dear themes to me. This has to do, first, with my use of time in terms of my artistic production - the time taken to investigate and make a work of art. Moreover, it results from my line of research that follows a historical orientation about the memory of the place , and the question of memory and gender in a feminist and queer perspective.

The subtitle used here 'Time that has already been time' is inspired by the ethno-sociological study by Paulo Monteiro on the villages of Lousã titled 'Land that has already been land'(1985). This is because the last of my projects, Xistórias, was developed in the villages of Lousã Mountain in central Portugal. It was a proposal for an artistic intervention in an area with a very troubled history - the product of a series of very problematic state and regional initiatives that resulted in the abandonment of the mountain by the inhabitants of their villages. Interesting to think that artists are now included in the current wave of investment that aims to transform rurality into touristic and cultural capital. In this context, it was a challenge to think of participatory methodologies to engage people on the ground and in the final event that was a four hour journey/walk across four villages with fifty people who came from Coimbra, Lisbon and Góis to participate.

In terms of artistic time, public commissions are a slow process. Xistórias was for me a research process of a few months that began with a first visit to the villages in August, when I went to see the area. I photographed and did some video too, and when I returned I created two small books that represented for me a kind of initial mental map of the project,ie, a preamble in two chapters.

The book SCHIST | XISTO is a document on the memory of the place . The villages are now almost completely abandoned as a result of a forestry regime that in the first decades of the twentieth century planted community land with pines and eucalyptus. This came to destabilize the delicate rural balance between trees, bushes, pastures, crops and livestock based on collective practices of land use. It led to the extinction of natural resources crucial for survival, that culminated in successive waves of migration to the cities and abroad and its depopulation. Although our framework is that of a very extended time, that has to do with rock formations and mountains and a very wide geological time, the schist villages are a brand that has now been launched for the region. It is manufacture of the place but does not necessarily have to do with local history or local time. Today the mountain is being promoted as a brand, “the schist landscape” in an attempt to attract the tourist gaze that is also a form of exoticism. This is an external time that is being deployed there and this juxtaposition has become my entry point into that space. The houses that are being rehabilitated persist alongside the ruins, the new rural urbanity alongside local life, coexisting in a state of entropy, between growth and decay. And I wanted to capture that process.

The book PAINTBALL FIELD | PAINTBALL FIELD depicts an uncanny , defamiliarised scenario, staged in a paintball field that I found in the Góis village, located in the base of the mountain, and part of the same touristic process behind the promotion of schist villages. This is a battle scenario where a surreal creature with a cork mask – the same as used in the villages during carnival- seems to be hunted by the other players. These are families who come with their children to enjoy themselves whilst training in the use of "ink weapons," since these are not exactly firearms. Without wanting to determine the reading, it seems to me possible to suggest that the performance of the masquerade seems to ironise the war game and expose the glorification of death implicit in the narrative of the paintball game. What I did was to edit this book in a time split to suggest another way to think of time in globalisation. What we have here are two times: the time of the mountain villages, that we associate with a time-less-present, perhaps a time-more-past, and the time of the the paintball field, that we associate with technological "edge," and perhaps a more-future-time . The presence of the mask shifts the time of the book to a more ethnographic time associated with the primitive and the ‘raw’ cultural condition, with all the connotations of appropriation and mystification of the so called “peasants’culture” that has resulted in its colonisation.

These were just some preliminary works as said. Later, in November, I went to the mountains and there I stayed three weeks in the tourists’ house in the Comareira village, that is managed by the Góis Council and is rented to tourists at sixty euros per night. A simple economic fact. It has central heating and where is now a space branded "schist" for travelers, once lived a family of sixteen persons. Another simple ethnograph fact, that concludes this introduction .

Excerpt from the presentation of the project to the Feminist University, during the seminar The Uses of Time, Lisbon December 18, 2013.